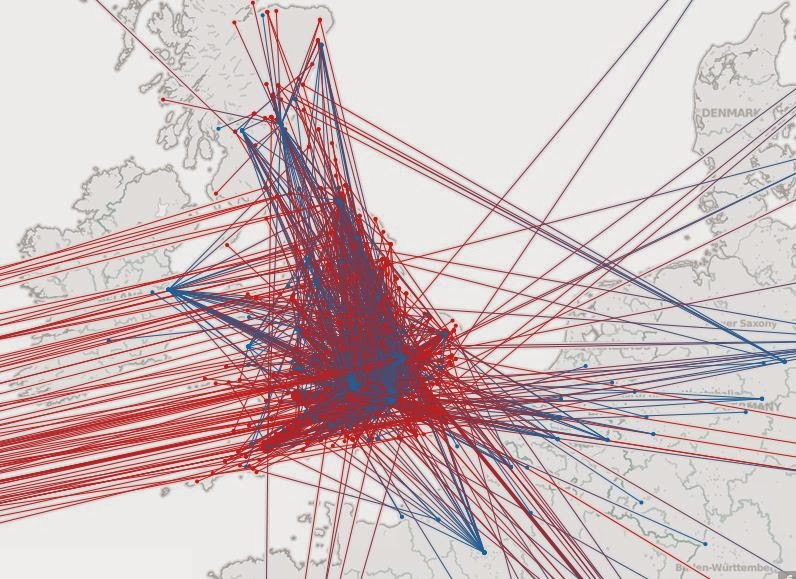 “Today I’m teaching a workshop on using “screen scraping” in the digital humanities. No workshop is really useful without practical examples so last week I decided to try out my screen scraping chops on an exciting  new database of book history data. The Kislak Center at Penn (where I’m Scholar in Residence) is quickly becoming one of the most important sites for book and manuscript provenance research and I wanted to see what I could do to highlight the potential for making extant provenance data more useful through new visualizations.

Several years ago, a few of the scholars behind the monumental Corpus of British medieval library catalogues project (now at fifteen volumes) led by Richard Sharpe began working on an online database to update and provide access to the wealth of information on medieval manuscripts contained in Neil Ker’s Medieval Libraries of Great Britain (1941, 1964, and 1987). These volumes include accounts of books and manuscripts known to survive today which once were owned within Great Britain before the mid-16th century. Recently, through grants from the Mellon foundation and others, the team has taken much of this information and made it available online in the MLGB3 searchable database. The site appears to be in beta mode at the moment and intermittently accessible but when it launches fully it will be an amazing resource and the culmination of a good deal of work by Sharpe and others. Looking through the database I was especially intrigued by the wealth of data on the current location of many of these medieval books and manuscripts. Given how comprehensive and detailed the project data is, even at this stage, I wanted to get a sense of what kind of picture would develop if we looked at the points of origin and current location of all these manuscripts in aggregate.”

Here's one for the horse girls! No illustrations, sadly, but the text of LJS 29, a 16th century Venetian manuscript, is a treatise in 84 chapters on the anatomy, medical treatment, physical appearance, breeding, training, and care of horses.
Today's #ManuscriptOfTheDay is Oversize LJS 28, 7 double-page navigational maps marked with place names and rhumb-lines aka a Portolan Atlas, or an atlas created for nautical use. Written in Venice between 1535 and 1538. #medieval #renaissance #manuscript #atlas #map #nautical
Today's #ManuscriptOfTheDay is Ms. Oversize 28, a 15th c. indulgence issued on behalf of a group of cardinals to visitors to the church of the Virgin Mary and Saint Catherine in Fronberg in Regensburg, Germany, including original wax seals.
Today's #ManuscriptOfTheDay is LJS 26, reatise on the fundamentals of arithmetic (Algorismus), followed by a treatise on cosmography that describes the model of a spherical earth divided into climactic zones, which is illustrated here. #medieval #manuscript #13thc #italy #italian #historyofmath #cosmography
Today's #ManuscriptOfTheDay is Oversize LJS 25, Aristotle's Metaphysics and Nicomachean ethics, in the Latin translations by the Dominican William of Moerbeke. Written in Italy or southern France in the late 13th c., with initials done in France. #medieval #manuscript #aristotle #philosophy #naturalphilosophy #translation #italy #france #illuminated #illuminations
Today's #ManuscriptOfTheDay is Ms. Codex 19, a list of rents due to one Ithier Bonea, seignor des Brousses. Most of the listings of tenants are by parish, occasionally by town. Written in France, Départment de Charante[?], in 1384. #medieval #manuscript #france #french #legal #law #historyoflaw #rents #historyofrentals