“The Hebrew-Italian Translations of the Early Modern Period: A Presentation and a Few Questions.”

In collaboration with Professor Alessandro Guetta, the Schoenberg Institute for Manuscript Studies (SIMS) and the Herbert D. Katz Center for Advanced Judaic Studies at the University of Pennsylvania hosted the first-ever Penn Virtual Seminar in Manuscript Studies.

The seminar invited some of the finest advanced graduate students and early career academics on the topic of Italian Jewish literature of the early modern period to join a live discussion. The participants, drawn from institutions across Europe, the United States, and Israel, gathered in conversation with Professor Guetta virtually in real time.

Professor Guetta presented a thus-far neglected phenomenon in Jewish textual history. In his words: “Since the brilliant articles by M. Steinschneider more than 100 years ago, little scholarly attention has been paid to the fascinating phenomenon of literary translations of Hebrew texts into Italian in the early modern period. Among the texts translated from Hebrew were fundamental classics–biblical, poetical, philosophical, sapiential, and other sources. These translations are especially interesting when compared with what happened in the other Jewish communities of the Christian world, where the local language was often not mastered, and certainly not written, until the late 18th century. Thus these texts teach us about the level of participation of Jews in the general cultural phenomenon of the volgarizzamenti—the translation of the classical corpuses into Italian. We will read together some significant texts, in both Hebrew and Italian, and ask ourselves the question: who were the potential readers of these works? Why were they written? We will also speak about the translations in the other direction, from Italian into Hebrew, in that period and later, and try to understand why such endeavors were undertaken at all.”

Branka Arrivé, Paris
Miriam Benfatto, Bologna
Ilaria Briata, Verona
Giada Coppola, Hamburg
Debra Glasberg Gail, New York
Francesca Gorgoni, Paris
Rachele Jesurum, Paris
Sarah Parenzo, Ramat Gan
David Sclar, Princeton
Anamarija Vargović, Paris
Our aim with this project was to create networks of exchange among scholars working on similar topics in various locations and between scholars and manuscripts. We saw through this first trial that this can be a model for strengthening scholarship in a community of researchers. 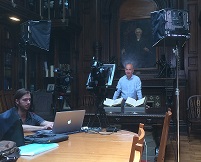 This week the Center has been delighted to welcome Alessandro Guetta, Professor of Jewish intellectual history at the Institut national des langues et civilisations orientales in Paris, to be the second annual Schoenberg Institute for Manuscript Studies [SIMS]/Herbert D. Katz Center Distinguished Fellow in Jewish Manuscript Studies. The fellowship, funded in part by the David Ruderman Distinguished Scholar fund, pairs a prominent scholar in any field of Jewish studies with a manuscript in one of our collections. Guetta spent the week looking at an early modern Italian Manuscript in the Schoenberg holdings: Malkiel Aschkenazi’s Tavnith ha-mishkan and Hanukath ha-bayith (now CAJS Rar Ms 460), produced in Mantua in the early seventeenth century. The full digital manuscript is available online.

On Wednesday June 28, 2017, Professor Guetta filmed a short-form Massive Open Online Course (MOOC) —a minicourse on the value of manuscript studies for Jewish history. The course explored the nature of the document, the significance of its material form, and what this rare document reveals about the Jewish landscape of Renaissance Italy. He moved from libraries to book burnings, and philosophy to architecture, in his wide-ranging introduction to the early modern fascination with the biblical Tabernacle and Temple.

The mini-MOOC is now in production and will be available free and universally this winter. It will sit alongside the one filmed last year by Professor Y. Tzvi Langermann, on a 15th -century Sicilian medical miscellany. To watch Langermann’s MOOC click here, and for more information click here.