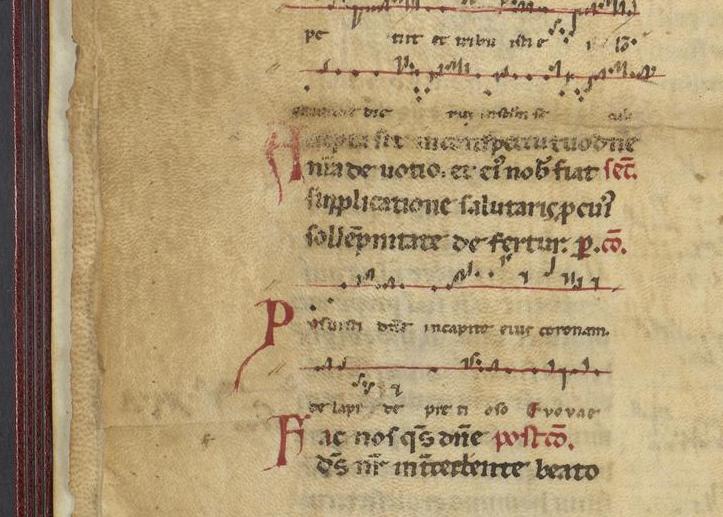 Coffee With A Codex on Monday, November 1, featured LJS 418, a 13th century Italian account of the martyrdom of Saint Blaise, bishop of Sebaste in Armenia, followed by readings and chants for a Mass of Saint Blaise. Additional texts, probably in different hands, at the end of the manuscript are mostly for baptisms, but also include one group of prayers for vestments and two rough sketches of Guidonian hands. (See the digitized manuscript and catalog record on BiblioPhilly)

This is an innocuous-looking manuscript, consisting of a single quire of eight leaves, only bound in the 19th century. Before it was bound, the quire was folded in half on the short side and would have been carried in a bag. The contents of the manuscript suggest a manuscript that would have been used by a traveling priest who may also have served as a physician – Saint Blaise is the patron saint of physicians, especially in matters of the throat. One of the attendees of Monday’s CWaC mentioned that during a service for Saint Blaise, candles might be crossed across the throat, signifying one of the saint’s miracles, where he prayed for a choking child and cured him.

The parchment is not particularly high quality. A few of the leaves (including folio 6, pictured above) have scallops on the edges showing where the legs and neck of the animal would have been, and the hair sides of the parchment are quite dark and show heavy smatterings of hair follicles.

There were some repairs made to the parchment at the time it was made, including a couple of instances where holes in the animal’s skin (which might have been bug bites, or even nicks made during early preparation) were sewn up before the skin was stretched.

The sewing repair on f. 3r still has the thread intact, which is unusual!

Find out more about this manuscript by viewing the digitized version and reading the full catalog record on BiblioPhilly.

We host Coffee With A Codex every Monday at 12pm ET / 5pm GMT on Zoom. For a schedule three weeks ahead, visit our main page here.