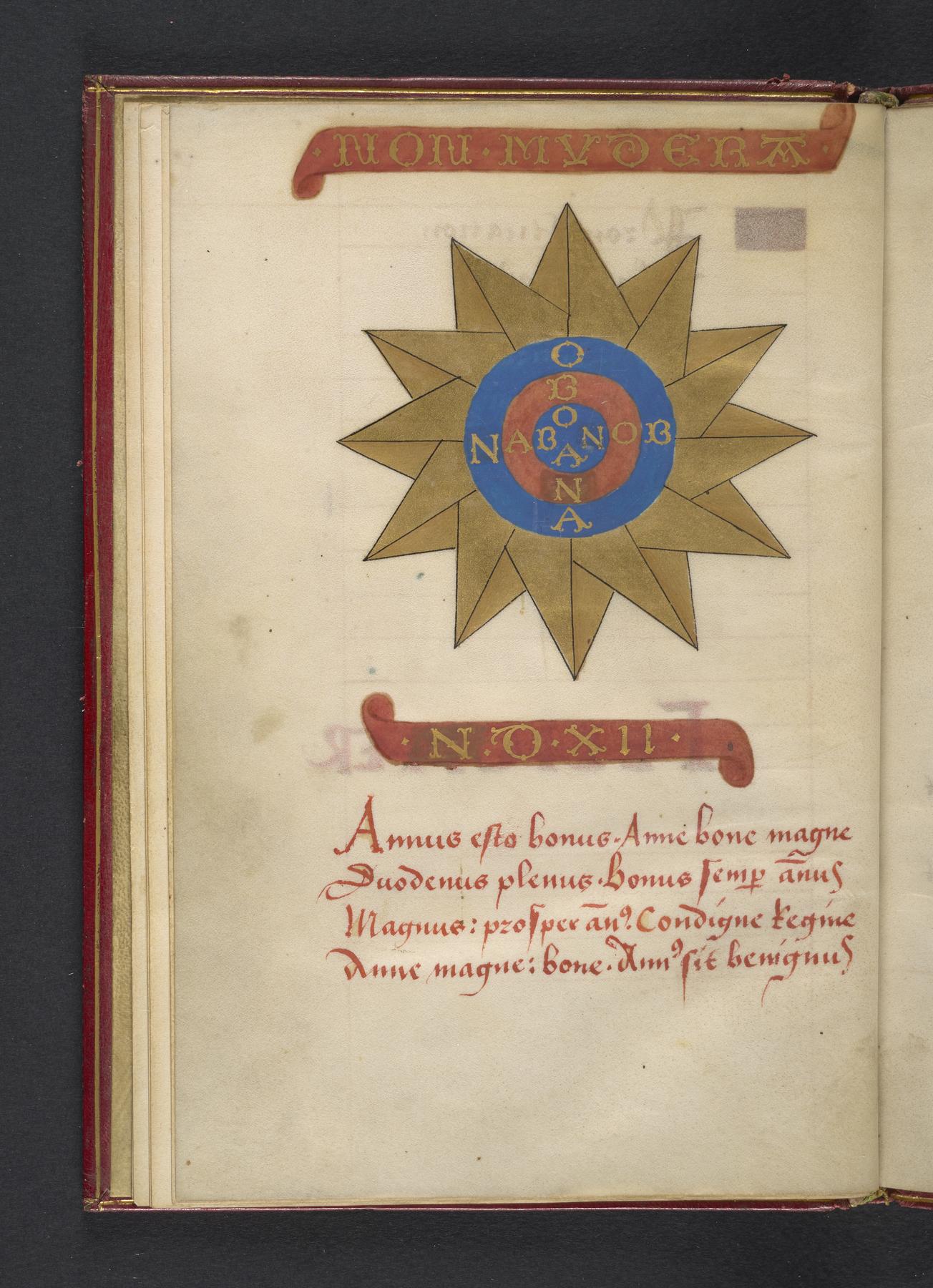 Fifty-two discoveries from the BiblioPhilly project, No. 1/52

Our series begins auspiciously with a long-lost royal prognostication on the good fortune of the year to come, the Pronosticque historial de la félicité future de l’an mil cincq cens et douze, or, translated roughly into English, the Exemplified foretelling of the future joy of the year fifteen-hundred-and-twelve. This sixteen-folio manuscript, written and signed by the important Walloon poet and historiographer Jean Lemaire de Belges (c. 1473–c. 1525), is an autograph copy produced for the Queen of France, Anne of Brittany (1477–1514). The text is otherwise unknown, and its rediscovery in the collections of The Rosenbach Museum and Library makes for an important addition to the author’s corpus while providing new information about the literary leanings of its famed recipient. Anne, to whom the work is dedicated, was an extraordinary political leader and a great patroness of the arts. She has the distinction of being the only French sovereign to have been twice crowned, first as the wife of King Charles VIII and then, after his sudden death in 1498, as the consort of Charles’ successor and second cousin once removed, Louis XII. 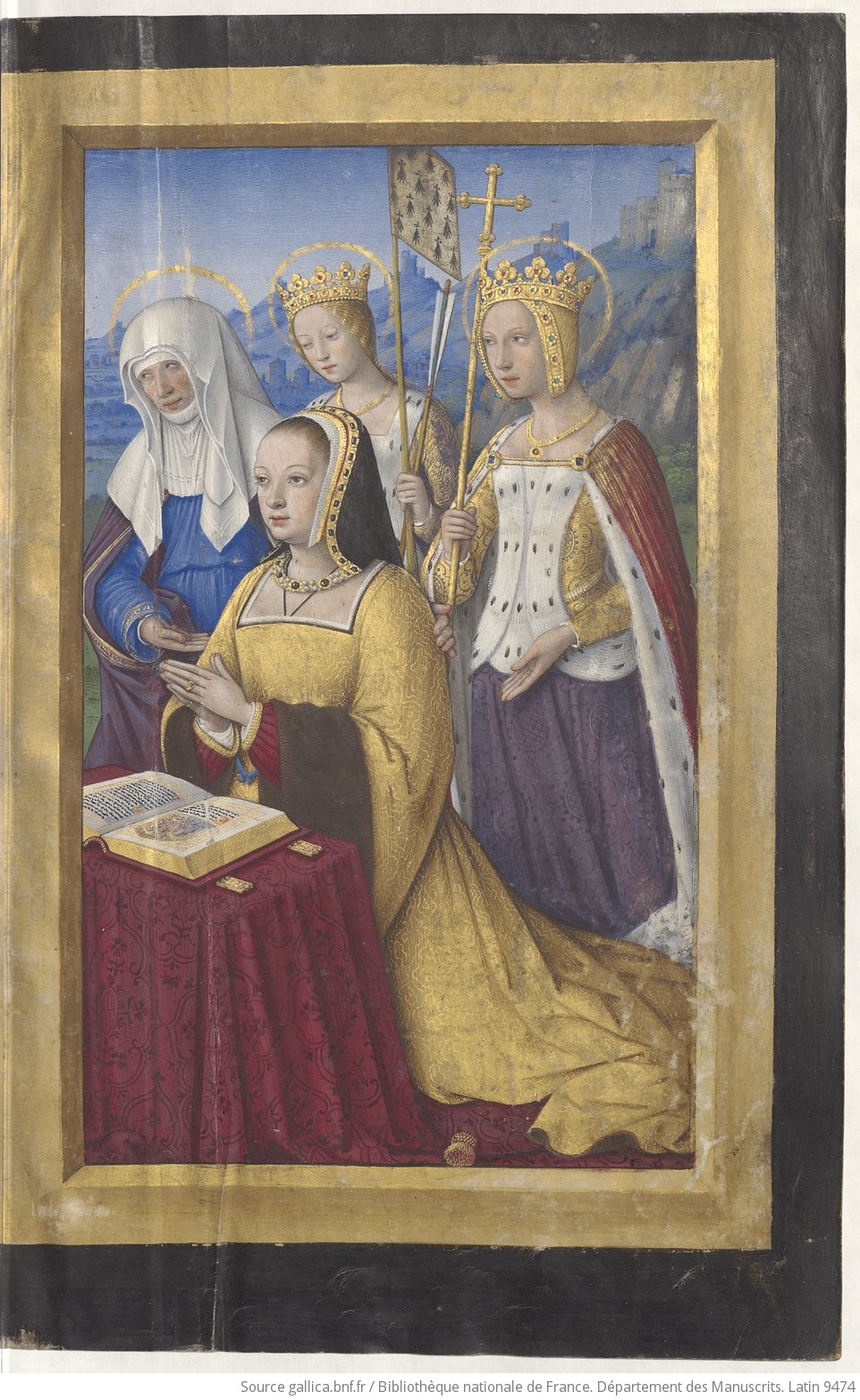 Philadelphia in fact preserves numerous manuscript artifacts related to Anne and her husbands: the Free Library of Philadelphia houses the beautiful February, June, August, and September calendar pages from a grand Book of Hours made by the court painter Jean Bourdichon for Louis XII in 1498, while a single leaf fragment with a miniature of the Lamentation by Jean Poyer includes, on its reverse side, an inscription identified by Roger Wieck as possibly being in Anne’s own hand.[efn_note]See Roger S. Wieck, “The Artist Jean Poyet and His Oeuvre,” in The Hours of Henry VIII: A Renaissance Masterpiece by Jean Poyet, ed. Roger S. Wieck, William M. Voelkle, and K. Michelle Hearne (New York: George Braziller, 2000), 27–29.[/efn_note] The FLP also houses a manuscript with an unusual binding decorated with the ermine tail, one of Anne’s emblems, and a (previously unnoticed) fragment from the once-impressive choirbooks commissioned by Anne and Louis,[efn_note]For an otherwise comprehensive list of known fragments, see Christopher De Hamel, Gilding the Lilly: A Hundred Medieval and Illuminated Manuscripts in the Lilly Library (Bloomington: Lilly Library, 2010), no.83, 183.[/efn_note] bearing their initials and emblems. Anne’s library has been the subject of some excellent recent scholarship,[efn_note]Cynthia J. Brown, ed., The Cultural and Political Legacy of Anne de Bretagne: Negotiating Convention in Books and Documents (Cambridge: D.S. Brewer, 2010); Cynthia J. Brown, The Queen’s Library: Image-Making at the Court of Anne of Brittany, 1477-1514 (Philadelphia: University of Pennsylvania Press, 2010).[/efn_note] and this new find helps to enrich our knowledge even further.

As mentioned above, the present manuscript is the sole surviving exemplar of an unpublished text apparently unknown to specialists. Its most detailed prior mention occurs in the Report of the Royal Commission on Historical Manuscripts of 1876, when it was in the collection of Evelyn Philip Shirley (1812-1882) of Ettington Hall, Warwickshire (where, incidentally, scenes from the 1963 film The Haunting were filmed). It was presumably Shirley who brought the manuscript to the British Museum to have it inspected by Keeper of Manuscripts John Holmes (1800-1854), whose handwritten notes are found in the front flyleaves of the manuscript. Previously, it had been in the collection of Walter Henry Bracebridge (1781–1871). It is not immediately clear how the manuscript ended up with A.S.W. Rosenbach in Philadelphia. Despite being present in prominent collections, the book has escaped mention in the voluminous literature dedicated to Lemaire de Belges, being noted briefly only in Paul Oskar Kristeller’s Iter Italicum. As such, I am currently at work on a critical edition of the short text, to be published in the not-too-distant future.

But what does this unusual text actually say? As a prominent court poet, Lemaire de Belges was renowned for creating “poésies de circonstance” or short works intended to address a particular situation. In this case, he addressed the auspicious numerological circumstances of the year 1512. The first page opening includes the queen’s Castilian motto “NON MUDERA” inherited from her Spanish mother (and also seen below, on the right, in the most splendid book she owned, the Grandes Heures d’Anne de Bretagne), as well as the year in Roman numerals. These inscriptions are contained in two red banderoles, which frame a star-like emblem with a cypher containing the letters of ANNA BONA (good Anne/good year). 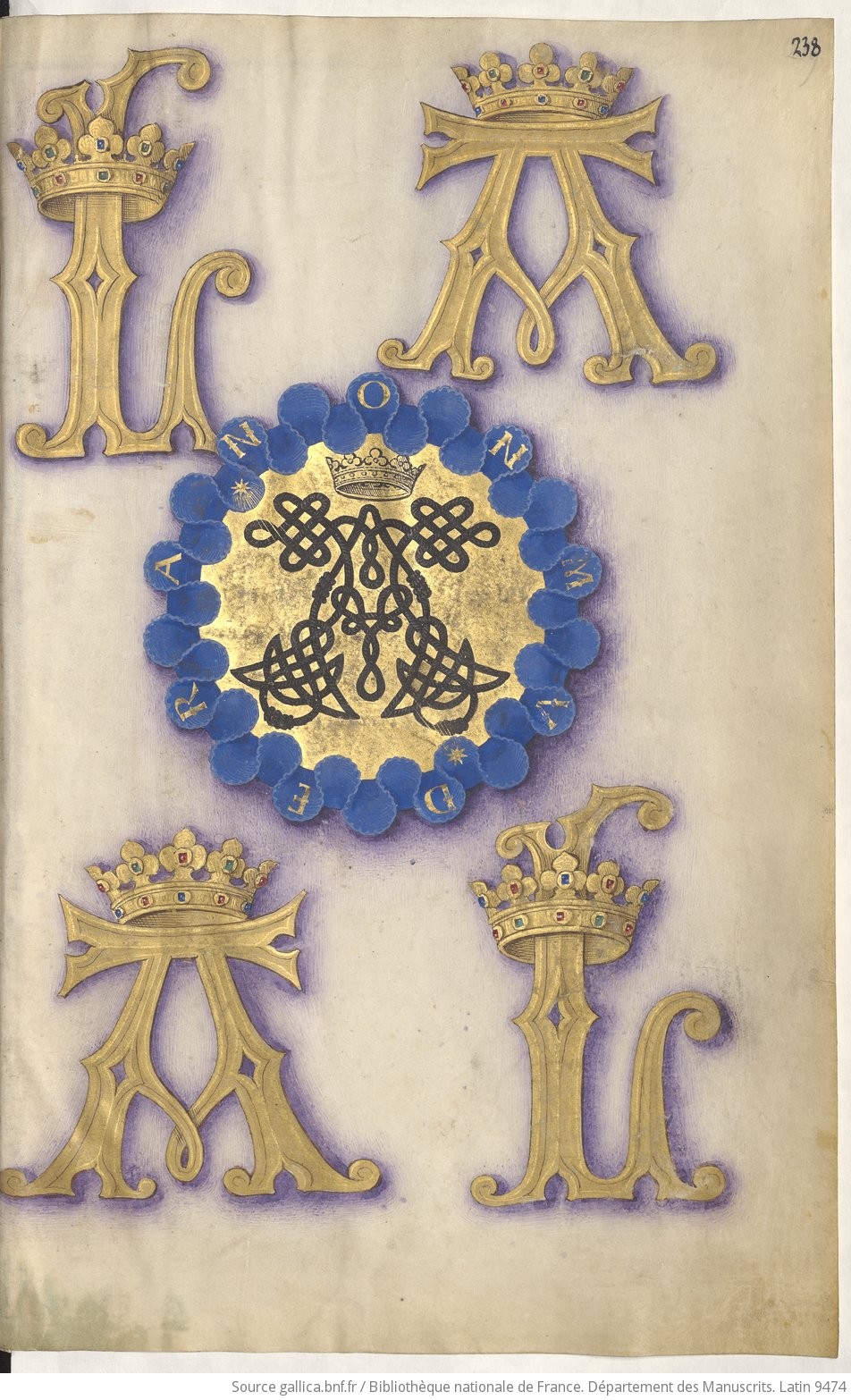 The book’s prologue consists of a pompous justification as to why a historian like Lemaire de Belges ought to engage in prognostication, traditionally the realm of soothsayers and astrologists. The first main section of the text (fols. 5v-8r) consists of examples from ancient and modern history demonstrating the universality and preeminence of the number twelve (“universalité et preeminence du nombre de douze”). The second section (fols. 8v-10v) draws parallel examples of duodecimal supremacy from the sacred scriptures. A conclusion (fols. 11r-15v) draws together both strands while explaining the palindrome-like pun, visualized in the opening emblem, of ANNA BONA (“good Anne”) being a pseudo-anagram of BON AN (“good year,” in French). A helpful colophon (fol. 15v, see image below) tells us that the short text was written in Paris at the beginning of January, 1512. It is subscribed by a large rendition of Lemaire de Belges’ personal motto, “De peu assez,” (In little, enough), in sputtering red ink. Finally, the text is accompanied by a rhyming “double virelay” (fols. 16r-16v), also unpublished, consisting of two twelve-line stanzas, signed by the author at its conclusion (fol. 16v):

Lemaire de Belges and his contemporaries were fond of word play, complex rhymes, and clever layouts. In fact, another manuscript in Philadelphia, quite damaged and certainly not an autograph copy by its author, contains a similarly virtuoso device in praise of Queen Anne. The University of Pennsylvania’s partial copy of Le vray-disant, advocate des dames (UPenn Ms. Codex 956), written in the same years by Lemaire de Belges’ contemporary Jean Marot, includes a “Ballade de la Paragonne des Dames” in which the letters at the start of each line spell the Queen’s name and title: ANNE DE BRETAIGNE, ROYNE DE FRANCE. This kind of acrostic device was especially popular with the French rhétoriqueurs of the early sixteenth century. Can you spot this example of word-play in the images below?

The unicorn has a single four-foot horn in the middle of its forehead, so sharp and strong that it tosses in the air or impales whatever it attacks. It has such strength that it can be captured by no hunter's ability, but, as those who have written about the natures of animals claim, if a virgin girl is set before a unicorn, as the beast approaches, she may open her lap and it will lay its head there with all ferocity put aside, and thus lulled and disarmed it may be captured.
LJS 451 is an anonymous commentary on a 12th-century didactic poem composed by the French Franciscan Alexander de Villa Dei addressing parts of speech, syntax, and rhetorical figures. It was written in France in the late 13th century. #medieval #manuscript #poetry #13thcentury #france #didactics #asmr #bookhistory #rarebooks
Ms. Codex 2053 is a 14th-15th century Missal, including some sections with musical notation, and a full-page Crucifixion miniature in red and brown ink and yellow and brown wash added in the second half of the 15th century #medieval #manuscript #missal #italy #rome #crucifixion #music #notation #musicalnotation #14thcentury #15thcentury #rarebooks #bookhistory
Today's #MedicalMonday is Ms. Codex 1660, a collection of alchemical recipes for medicinal use. Recipes include elixirs for epilepsy or stroke, purgatives, stomachics, remedies for worms, deafness, toothaches, gangrene and a number of powders, oils, syrups, and spirits with detailed information on their creation and application. Probably written in France in the second half of the 18th century #medicine #medical #historyofmedicine #historyofscience #alchemy #recipes #manuscript #18thcentury #france #bookhistory #rarebooks
LJS 447 is an Arabic work containing descriptions and illustrations of domestic and wild animals, birds, insects, marine animals, plants, stemless plants, and herbs. Written in Aleppo, Syria, in 1710 by Jibrāyil ibn Mikhāyil al-Ḥamawī #18thc #arabic #animals #birds #insects #herbal #plants #illustrated #zoology #botany #rarebooks #bookhistory
LJS 64 is a book of diagrams, many with moving parts, called volvelles, designed to accompany the work Theoricae novae planetarum by 15th-century Austrian astronomer Georg von Peurbach. Written in northern Italy, probably Padua, in the mid-16th century. #renaissance #medieval #volvelles #astronomy #italy #padua #diagrams #bookhistory #rarebooks #bookstagram #librariesofinstagram