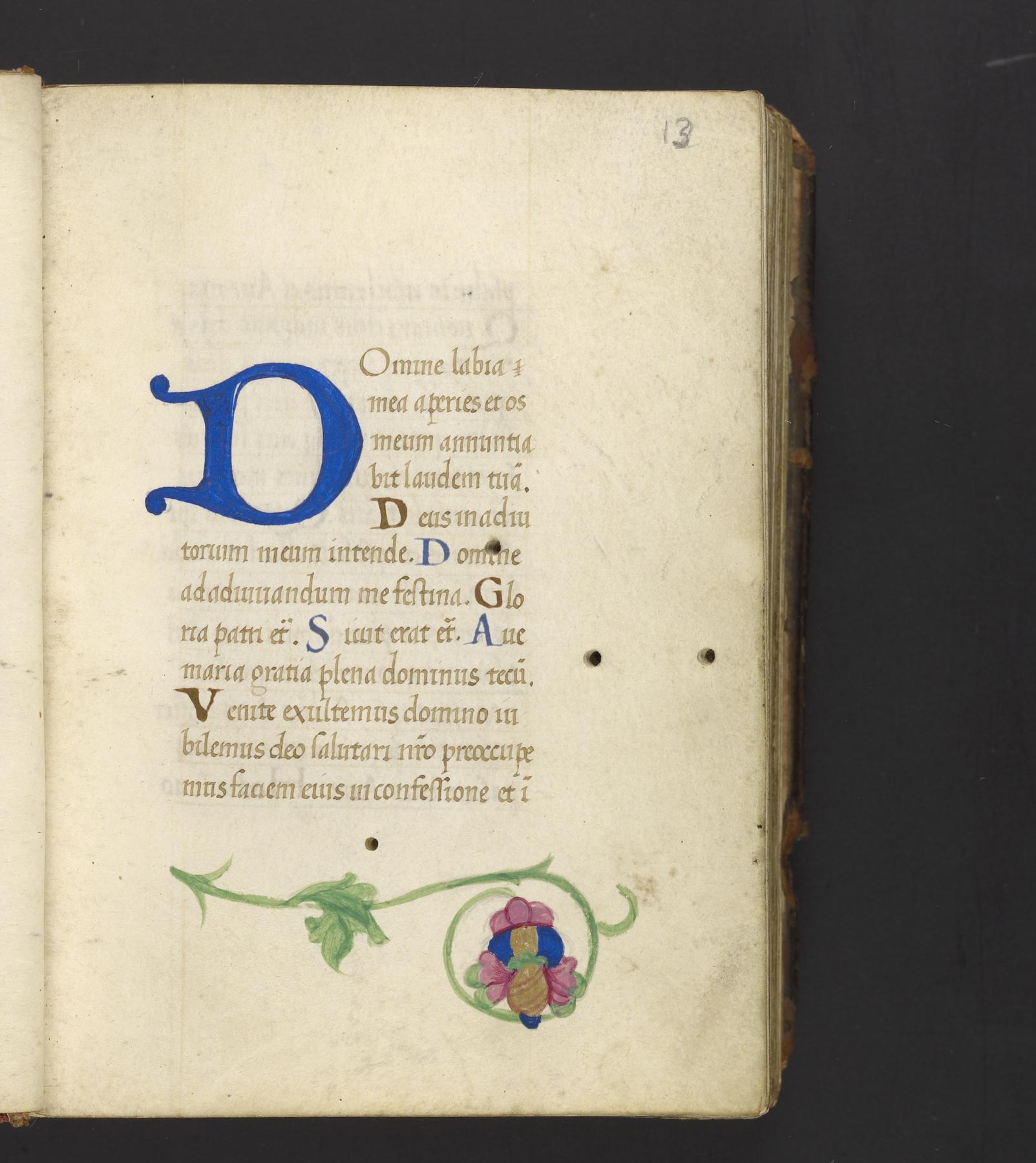 Fifty-two discoveries from the BiblioPhilly project, No. 22/52

Book of Hours for the Use of Rome, University of Pennsylvania, Ms. Codex 688, fol. 13r

The Bibliotheca Philadelphiensis project did not formally include manuscripts at the University of Pennsylvania, which had already been digitized and made available on the OPenn repository several years ago. However, these manuscripts will soon be integrated within the BiblioPhilly browsing interface in an effort to produce a comprehensive digital resource for pre-modern manuscripts in the region. Preparations for the upcoming “Making the Renaissance Manuscript: Discoveries from Philadelphia Libraries” exhibition I am curating at the Kislak Center for Special Collections, Rare Books and Manuscripts (February–May 2020) have provided an additional reason for looking more closely at some of Penn’s European manuscripts, which still have plenty of secrets to reveal. As many of us know, mere digitization does not equal discovery!

Ms. Codex 688 is written in a fine humanist hand. It is a late example of a format and genre popular in Central and Northern Italy earlier in the fifteenth century. The text of the Calendar and the principal offices is in Latin, as is the case in the overwhelming majority of Books of Hours from all regions of fifteenth- and sixteenth-century Europe. The Calendar contains saints venerated in Northern Italy generally, including Ambrose of Milan (7 December), Secundus of Asti (1 June), and Prosdocimus of Padua (7 November). However, a more precise indication of origin is hinted at by the presence of the unusual Dedication of Saint Mark’s Basilica (8 October), which firmly locates the book in Venice. Reflecting the increasing prevalence of vernacular prayer in the fifteenth century, towards the end of the book, after the Hours of the Holy Spirit (fols. 86r–128v), there are also weekday prayers in Italian. This particularity had been noted without further elaboration in the the existing catalog record for the manuscript, and is not altogether surprising.

But what do these prayers actually consist of? They are in fact a set of devotions intended to be performed in front of a crucifix. This is a rather precise and unusual series of prayers for a Book of Hours, perhaps related to the fact that the book contains no illuminations.[efn_note]For crucifix-related prayers in a Netherlandish context, see Kathryn M. Rudy, Rubrics, Images and Indulgences in Late Medieval Netherlandish Manuscripts (Leiden: Brill, 2016), 67–72.[/efn_note] The prayers are also a reminder of how Books of Hours were often intended to be employed in concert with works in other media, in this case a sculpture. There is one prayer for each day of the week plus another for Palm Sunday, and each is prefaced by detailed instructions about the specific gestures to be made by the devotee while reciting the text.

Reading these instructions, we notice some distinct spellings and words that are not of the mainstream, Tuscan variant of Italian. For example, we read “Zuoba” and “Domenega” for Thursday and Sunday respectively instead of the habitual “giovedì” and “domenica”; “zonte le mane” instead of “giunte le mani” for joined hands; “quindexe” instead of “quindici” for the number fifteen, and so on. These unusual orthographies point to a Venetian dialect (here truly a regionally inflected variant of Italian as opposed to the more distinct Venetian language) as recorded in dictionaries such as Giuseppe Boerio’s Dizionario del Dialetto Veneziano.[efn_note]Giuseppe Boerio, Dizionario del Dialetto Veneziano (Venice: Santini, 1829).[/efn_note] A few words seem closer to variants attested in the Milanese vernacular, in particular “morzada” for “extinguished,” which is an unusual spelling close to the “smorzada” recorded in Milan.[efn_note]See Cletto Arrighi, Dizionario Milanese-Italiano (Hoepli: Milan, 1896).[/efn_note] On balance, though, it seems likely that the Book of Hours was produced for use in Venice, especially considering the presence of the Dedication of Saint Mark’s in the calendar, much rarer and more geographically specific than Saint Ambrose or even Saint Prosdocimus of Padua.

Equally fascinating is the attitude that the supplicant should take when pronouncing each prayer. On Palm Sunday, the prayers are to be said while looking up with joined hands:

On Mondays, with hands crossed over the knees in memory of the flagellation:

On Tuesdays, at the foot of the cross in the manner of Mary Magdalene:

On Wednesdays, prostrate and face to the ground:

On Fridays, the devotee is to recite the Pater Noster (Our Father) and Ave Maria (Hail Mary) five times, kissing each of Christ’s wounds once, in memory of the Crucifixion:

On Saturday, prayers must be said while holding an extinguished candle (“candela morzada”) in memory of Christ’s death:

On Sunday (“domenega”), the candle is to be lit as a symbol of his resurrection:

For each day of the week, the prayers are to be said before breakfast (“avanti che tu manzi ne bevi”).  This unusual guide to prayer shows the extent to which such compact prayer books were intended to be used in concert with devotional images, especially when not otherwise illustrated. They also allow us to nuance and enrich the corpus of Italian Books of Hours, which is often considered as a monolithic block.