Fifty-two discoveries from the BiblioPhilly project, No. 36/52

As the holiday season approaches, it seems appropriate to devote a pair of posts to a lovely, if little-known gem of the Free Library of Philadelphia’s collection of manuscripts. This charming and well-used manuscript on paper contains an anthology of lyrics for Christmas carols, or Noels, written principally in French and dating to the 1520s.

The book was acquired by the Free Library of Philadelphia in June 1955 from H.P. Kraus in New York, and Kraus’ catalogue 75 of that year remains the most substantial existing description of the manuscript.[efn_note]H. P. Kraus, bookseller, New York, cat. 75, 1955, no. 77.[/efn_note] As the author of that catalogue description wrote, “it will be a gratifying task for a scholar interested in French popular poetry to study the present manuscript very thoroughly.” In the sixty-five years since the appearance of the Kraus catalogue, this assignment has not, to my knowledge, been completed! The book is known to local audiences in Philadelphia because its contents have been used as the basis for a series of period music concerts by the local Renaissance Band, Piffaro. However, the anthology is entirely absent from any scholarly literature on French Renaissance music or art, which is a shame. The forty-four carols appear to be composed of certain well-known songs represented in other manuscript anthologies, such as Oxford, Keble College, MS 33 (see Parkes 1979, 117–26),[efn_note]See Malcolm Beckwith Parkes, The medieval manuscripts of Keble College Oxford: a descriptive catalogue with summary descriptions of the Greek and Oriental manuscripts (London: Scolar Press, 1979), 117–26.[/efn_note] but also present are several unique or unrecorded texts. Many of the songs are included  in later printed works, such as one issued in Le Mans around 1590—Paris, BnF, Rothschild MS 2982—which purports to contain traditional Christmas songs “les plus requis du commun peuple” (“the most sought-after by the common folk”). The use of the regional Angevin terms “nau” and its diminutive “naulet” for Noël, as well as the notarial document reused as a wrapper mentioning Nantes, point to the Western Loire Valley as the region of production and use, indeed not far from Le Mans, where the Rothschild pamphlet was printed.[efn_note]For these regional terms, see Anatole-Joseph Verriet and René Onillon, Glossaire Étymologique et Historique des Patois et des Parlers de l’Anjou (Angers: Germain et G. Grassin, 1908), 2:53.[/efn_note]

The carols included in the anthology are of course mostly anonymous and lack any kind of musical notation. Instead, the particular melody to be followed is usually singled out at the beginning of the carol. Upon examining the manuscript last year, I noticed that one carol, “Il fault mourir à ce coup cy,” is attributed by an inscription to its author Olivier Maillard (ca. 1420–1502; fol. 41v), the famous populist preacher active during the time of Louis XI and Charles VIII. This well-known poem consists of a rather macabre warning of the impending last judgement, even though it is to be sung, rather ironically and self-consciously, to the rhythm of a rather carefree bergeronnette savoysienne (a shepherdess’ ditty).[efn_note]For the poem, see Peter Loewen, “Olivier Maillard in an Age of Reform,” Mélanges de l’École Française de Rome-Moyen Âge 130, no. 2 (2018), https://doi.org/10.4000/mefrm.4390.[/efn_note] Its presence here is a remarkable eschatological departure from the pleasant, festive Christmas songs that otherwise fill the book’s pages! 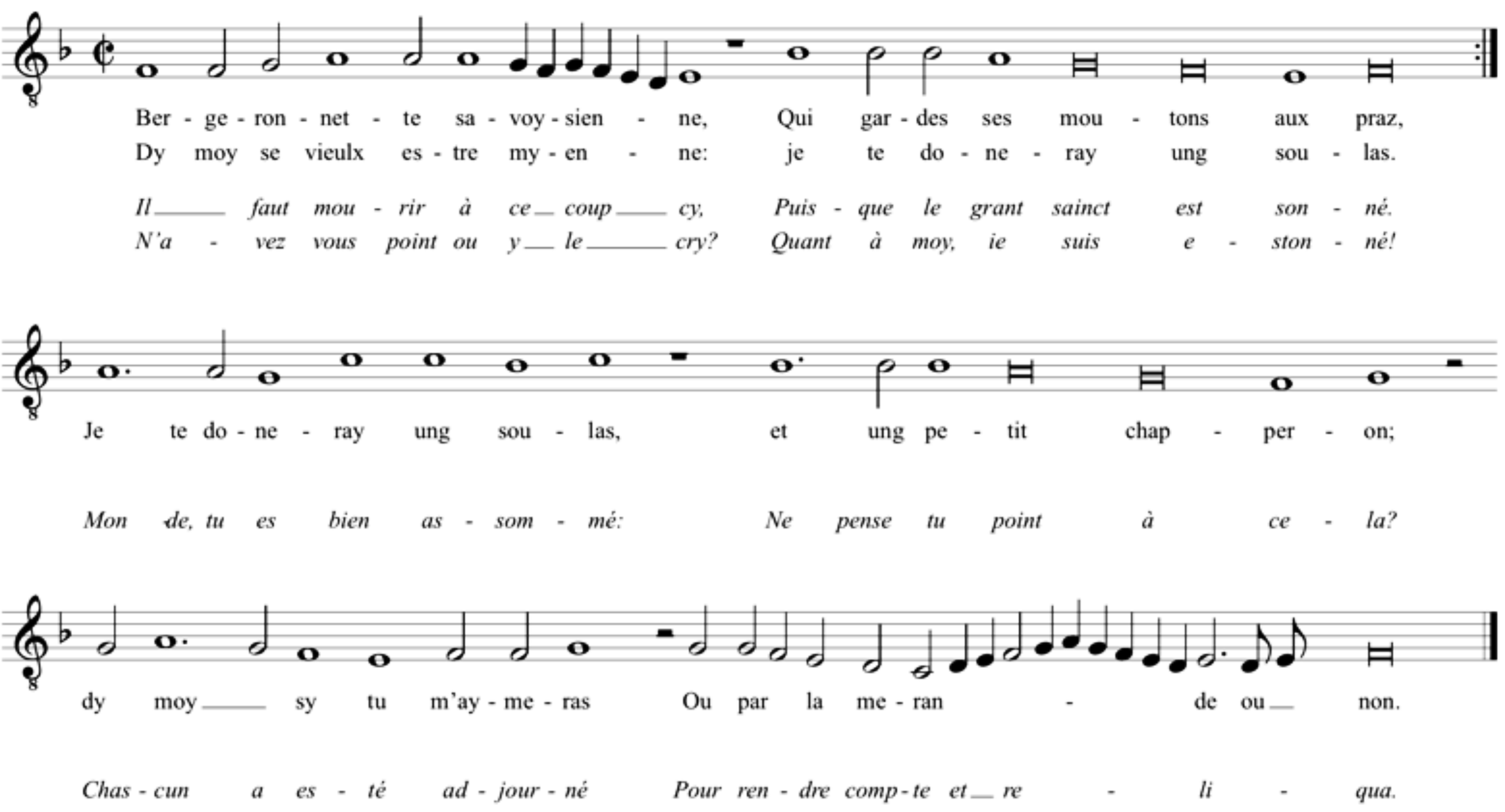 Musical setting from Loewen, “Olivier Maillard in an Age of Reform.”

Beyond its lyrics, the volume is notable for its twenty-five vividly drawn, watercolor-tinted scenes added to the blank marginal spaces surrounding the text. The rest of this post will examine these, while next week’s post will be dedicated to another lyrical discovery. The images, which could themselves be studied further, exhibit an idealizing, bucolic sentiment, combining sacred scenes (and undoubted references to Nativity plays) with rustic details of shepherds and peasants preparing meals and playing music. At the beginning of the volume (fol. 1r) is the most formal of such illustrations, consisting of a full-page Nativity miniature showing three attendant shepherds and one shepherdess (with a curious wide-brimmed hat) alongside the Holy Family.

In the frame enclosing the miniature we find the Marian Antiphon, usually associated with Easter rather than Christmas: “Regina celi letare, alleluya; Quia quem meruisti portare, alliluya; Resurrexit sicut dixit, alleluya; Ora pro nobis Deum, alleluya; amen, amen” (“Queen of heaven, rejoice, alleluia; The Son you merited to bear, alleluia; Has risen as he said, alleluia; Pray to God for us, alleluia”). The two-dozen  remaining illustrations (counting across-the-gutter compositions as one) are certainly by the same artist but are unframed and often extend to the edges of the paper, which has been trimmed on account of heavy use. These illustrations are drawn in a loose and economical style, but would seem to be the work of a talented artist, though whether he/she was a formally trained professional remains up for discussion. The lively scenes, a study in pastoral life of the 1520s, are worth examining one by one, especially as the blog format permits an endless display of illustrations! Indeed, they could be transformed into wonderful advent calendar of sorts. They represent:

A man with a plate of food drinking from a gourd (fol. 5r).

A man carving meat with a dog watching from the right (fol. 8r);

An upright goat near a tree and a man playing bagpipes with a dog alongside (fol. 9r).

A man and woman with staffs resting, a man standing holding a staff, and an angel with a banderole announcing “Paix est criée” (fol. 11v).

A shepherd standing with a staff and a man playing hurdy-gurdy with a boy (fol. 13r).

The Flight into Egypt with bull and ass (fol. 15v).

A man threshing crops with a sickle and Joseph from the Flight into Egypt (fol. 16r).

A boar playing the bagpipe and two men and a woman dancing (fol. 17v).

A king and two peasants sharing a meal (fol. 19r).

An Angel holding a banderole inscribed “Gloria in excelsis Deo” while below a man reclines in the right margin and another stands and plays the flute on the left (fol. 24r).

Two men labeled Michau and Robin facing each other across the text block (fol. 25r).

A man playing a pipe to an upright goat with staff (fol. 29r).

The serpent and the Temptation of Eve (fol. 31r).

And a man and a woman playing instruments (fol. 35v).

The manuscript can be dated to ca. 1520–30 on the basis of the style of the script, marginal images, and costume, with later sixteenth-century additions to the text towards the end. The pastoral aspect of the illustrations connects them to compositions found in tapestries of this period. The rustic appearance of the figures and settings also recalls roughly contemporary treatments of Virgilian poetry, especially an illustrated French translation of the Eclogues (Paris, BnF, MS fr. 1639). The precise recipient or intended audience for such a volume, which is clearly the result of significant effort, is unknown, but if we take up the challenge posed by the author of the manuscript’s 1955 sale catalogue entry, we may be rewarded with further contextual information about the manuscript’s genesis and use.