Fifty-two discoveries from the BiblioPhilly project, No. 44/52 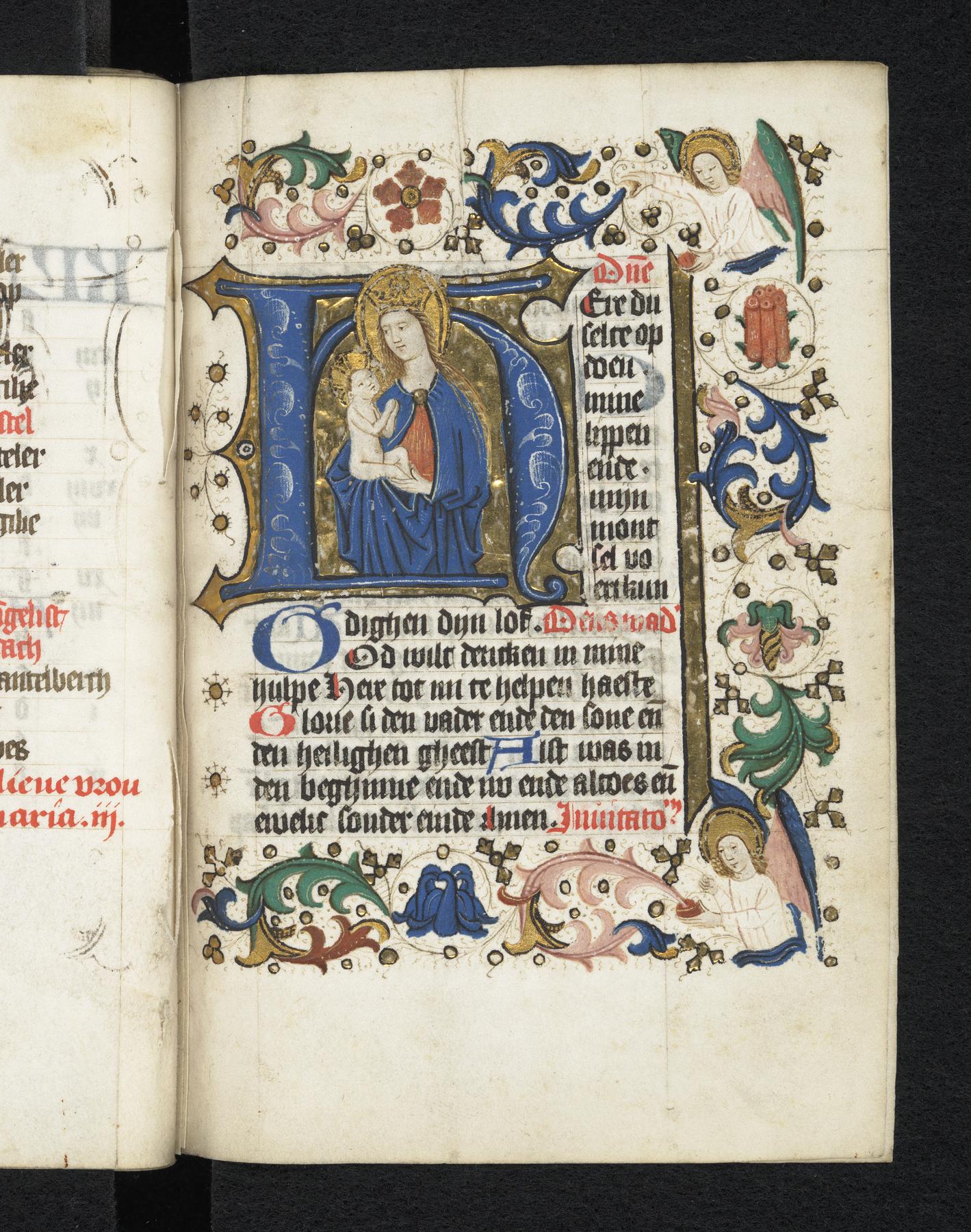 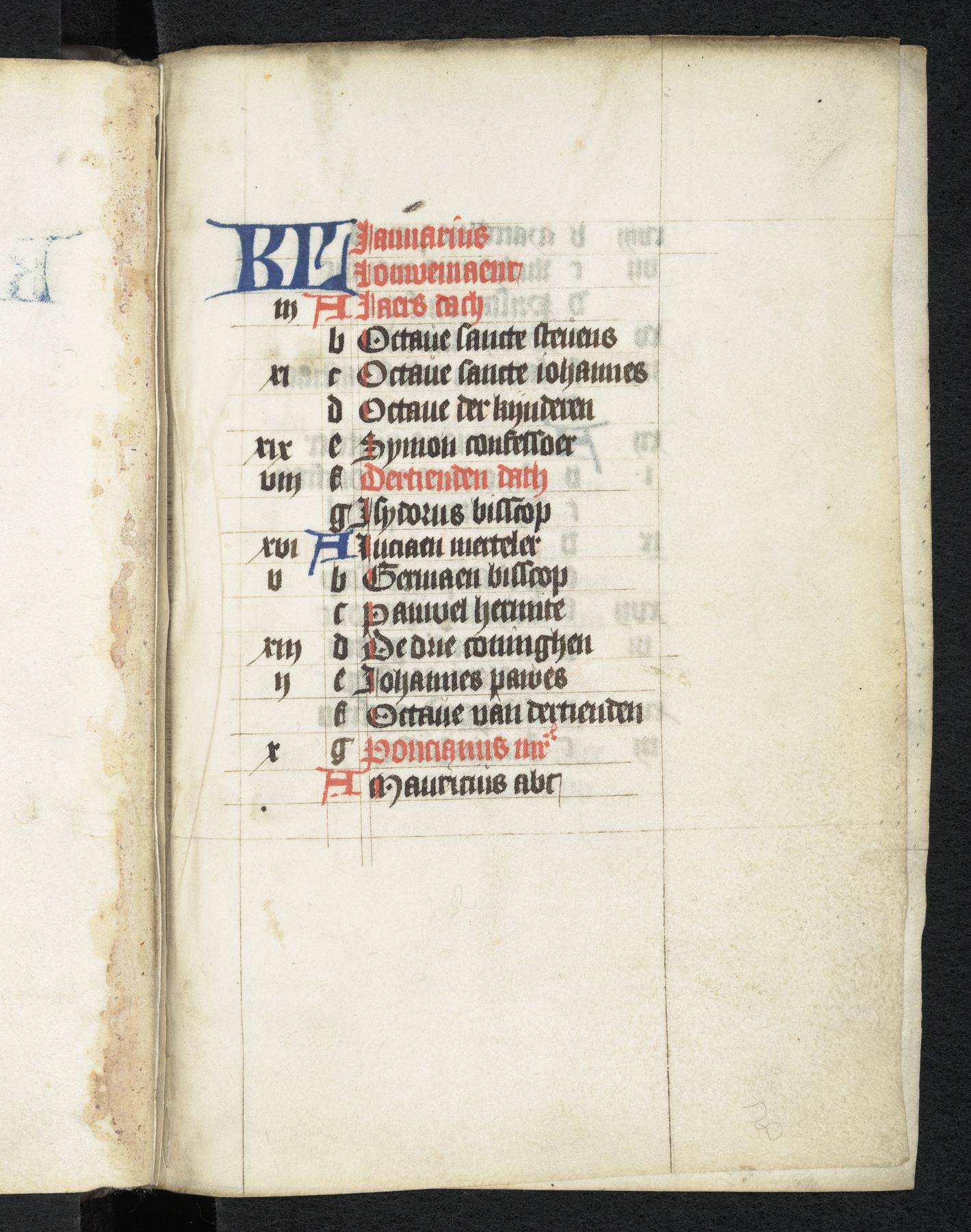 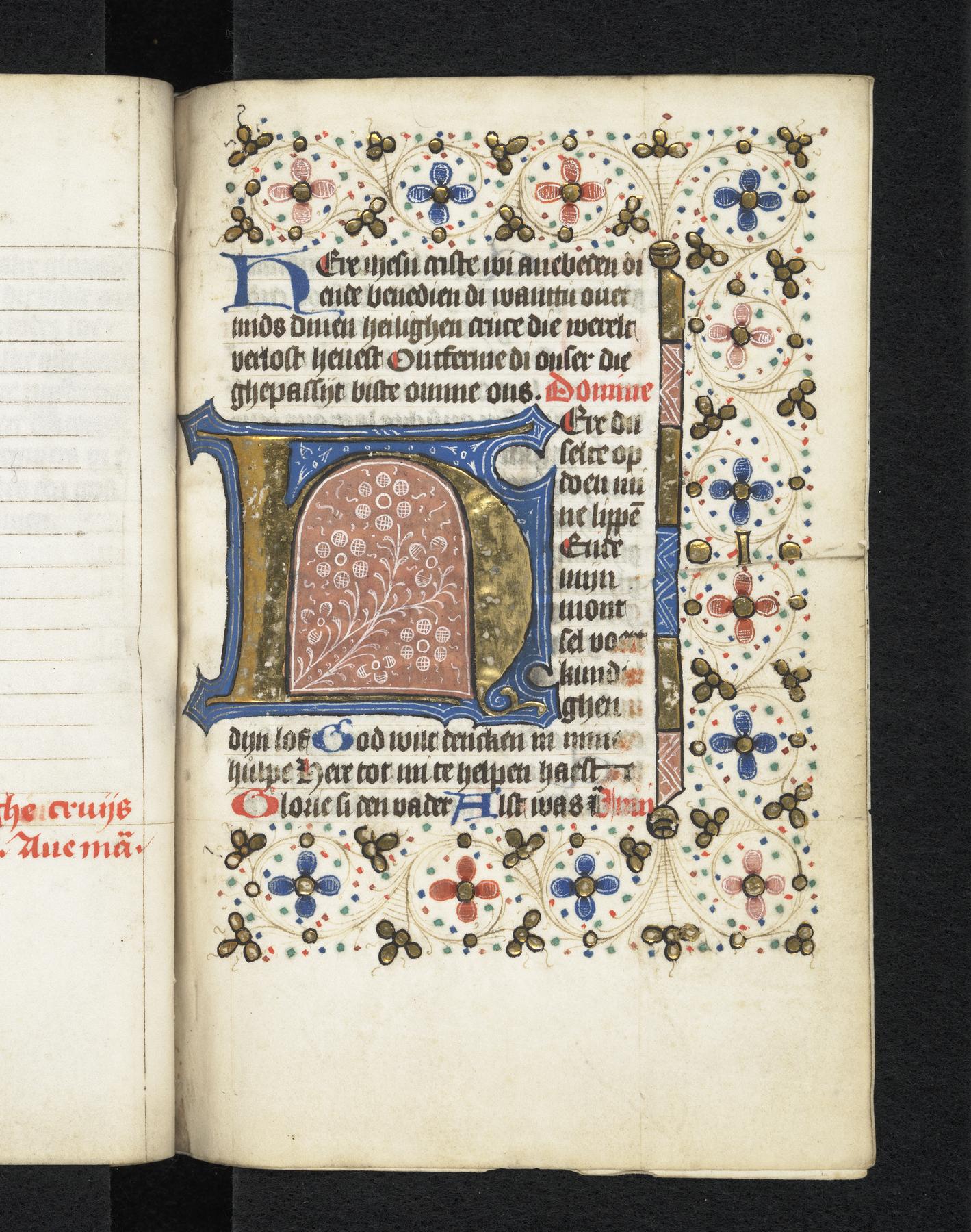 The book begins with an unillustrated calendar (fols. 1r-12v) before continuing with the Hours of the Virgin (fols. 13r-50r), which is introduced by a historiated initial featuring the Virgin and Child and a full border containing angels, the only figurative decoration in the book. The figurative decoration appeared to me to be attributable to the workshop of the Masters of the Zwolle Bible, who decorated many devotional and liturgical books for the Utrecht market in the second half of the fifteenth century. Other major sections are introduced by large illuminated initials featuring expansive areas of gold and foliate bar borders typical of Dutch book illustration of the mid-fifteenth century: the Hours of the Cross (fols. 51r-73v), Hours of the Holy Spirit (fols. 74r-98v), and Hours the Holy Wisdom (fols. 100r-121r), as well as the Penitential Psalms, Litany, and Prayers (fols. 122r-140v) and Office of the Dead (fols. 142r-178r). The textual subdivisions within each section are marked by illuminated initials and bar borders with flourishes. 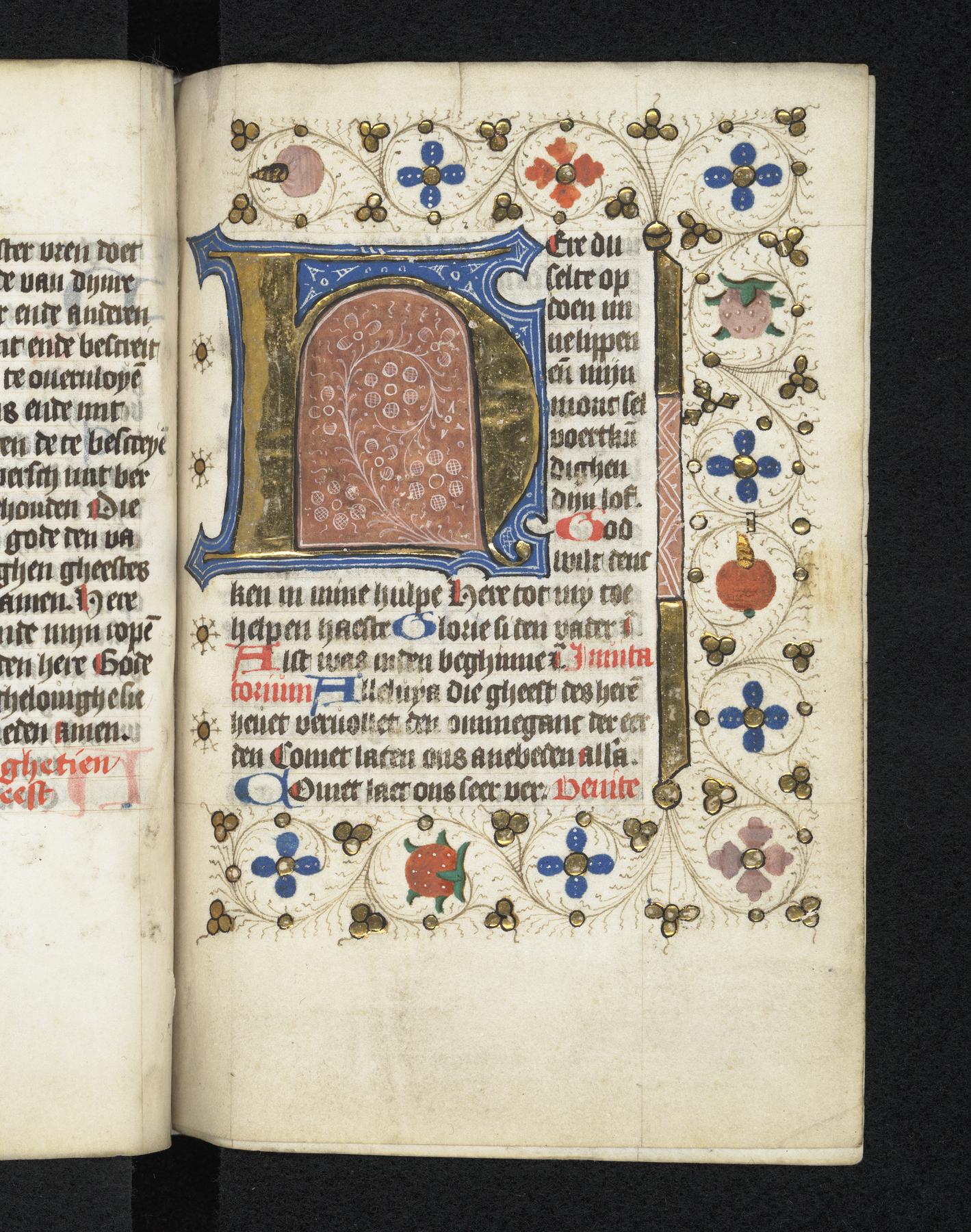 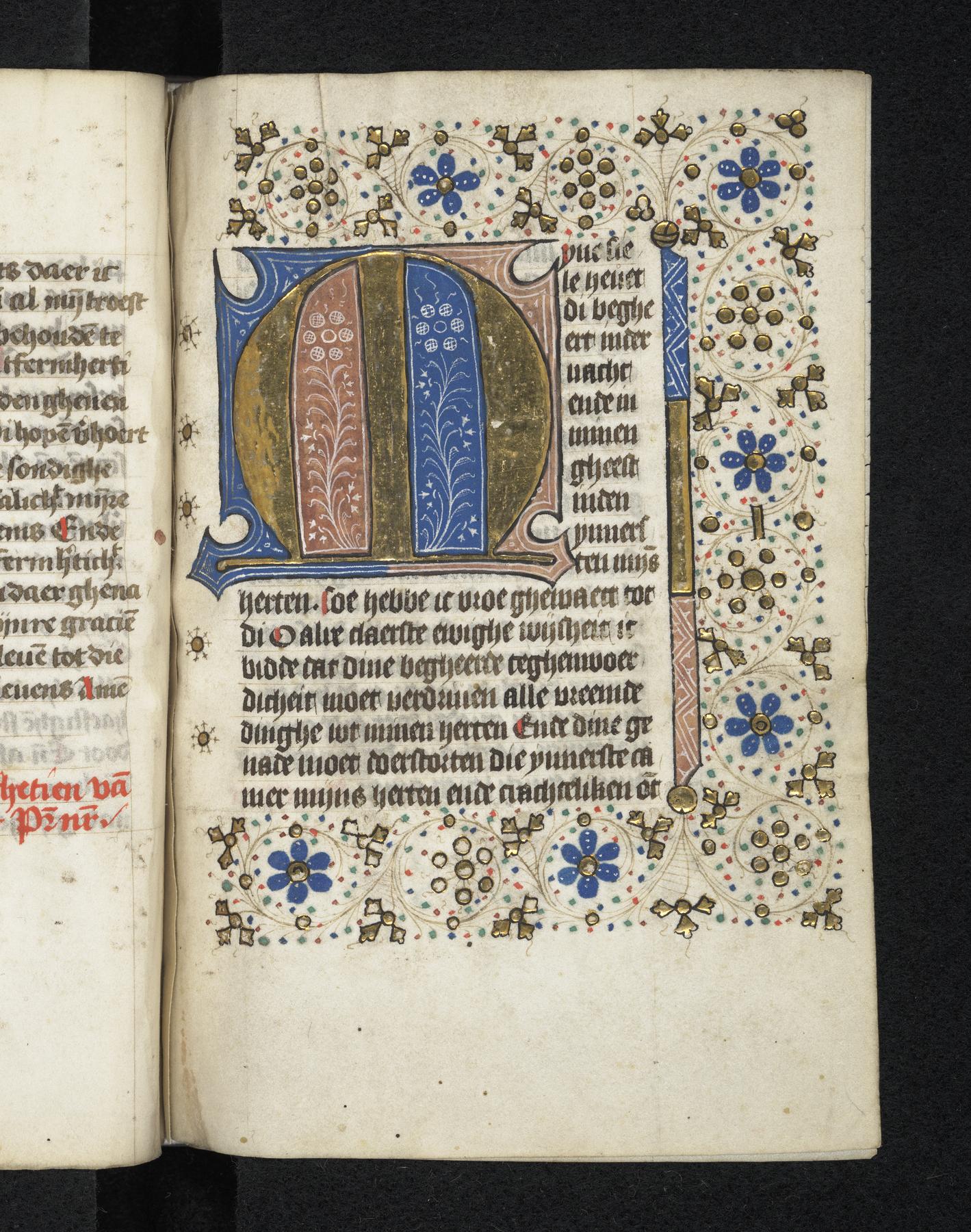 As it turns out, the Franklin & Marshall manuscript was not entirely unknown to the wider world. In fact, it had previously been digitized as part of the Digital Library of Illuminated Manuscrits. a regional project initiated by Lehigh University in 2005. In some ways, this was an early prototype for the Bibliotheca Philadelphiensis project, and indeed we were able to re-use the high quality imaging from this previous project when integrating the manuscript into the OPenn repository for BiblioPhilly, which obviously meant not only a time savings but, from a conservation perspective, less stress on the binding and less potential for inadvertent damage. In any case, as I discovered, the manuscript’s relatively early presence online meant that it was discoverable to specialist scholars. It is mentioned, illustrated, and included in a table of page ornament styles in an article published in 2017 by Remi van Schaïk and Jildou Bijlstra in the Historisch Jaarboek Groningen, a regional journal dedicated to the cultural heritage of Groningen and the surrounding area.[efn_note]Remi van Schaïk and Jildou Bijlstrain, “Het Groninger Stadboek gebonden en verlucht,” Historisch Jaarboek Groningen (2017): 6–27, esp. 18–20.[/efn_note] There, the manuscript is placed within its proper context and compared to other books of hours with very similar border and initial decoration that can be attributed to the Zwolle group. Though the article maintains the dating of ca. 1450 for the Franklin and Marshall manuscript – a date which had been assigned rather cursorily in the description made of the book by the dealer Lawrence Witten in July 1988, when it was gifted to the college by Hawley – the comparisons suggested by van Schaïk and Bijlstrain make clear that we are dealing with a book produced around 1470.

A further breakthrough would be finding the previous whereabouts of the so-called Hawley Hours, which I have endeavored to do using the Schoenberg Database of Manuscripts, to no avail. An ownership note written in pencil, in French, on verso of first upper flyleaf reads “11, Ex de M. de La Grange, no. 9.” and also includes a brief mention of the manuscript’s missing leaves. This may provide a link to the book’s earlier presence in a French collection, but since “de La Grange” is a common surname in France, further research is needed on this front. 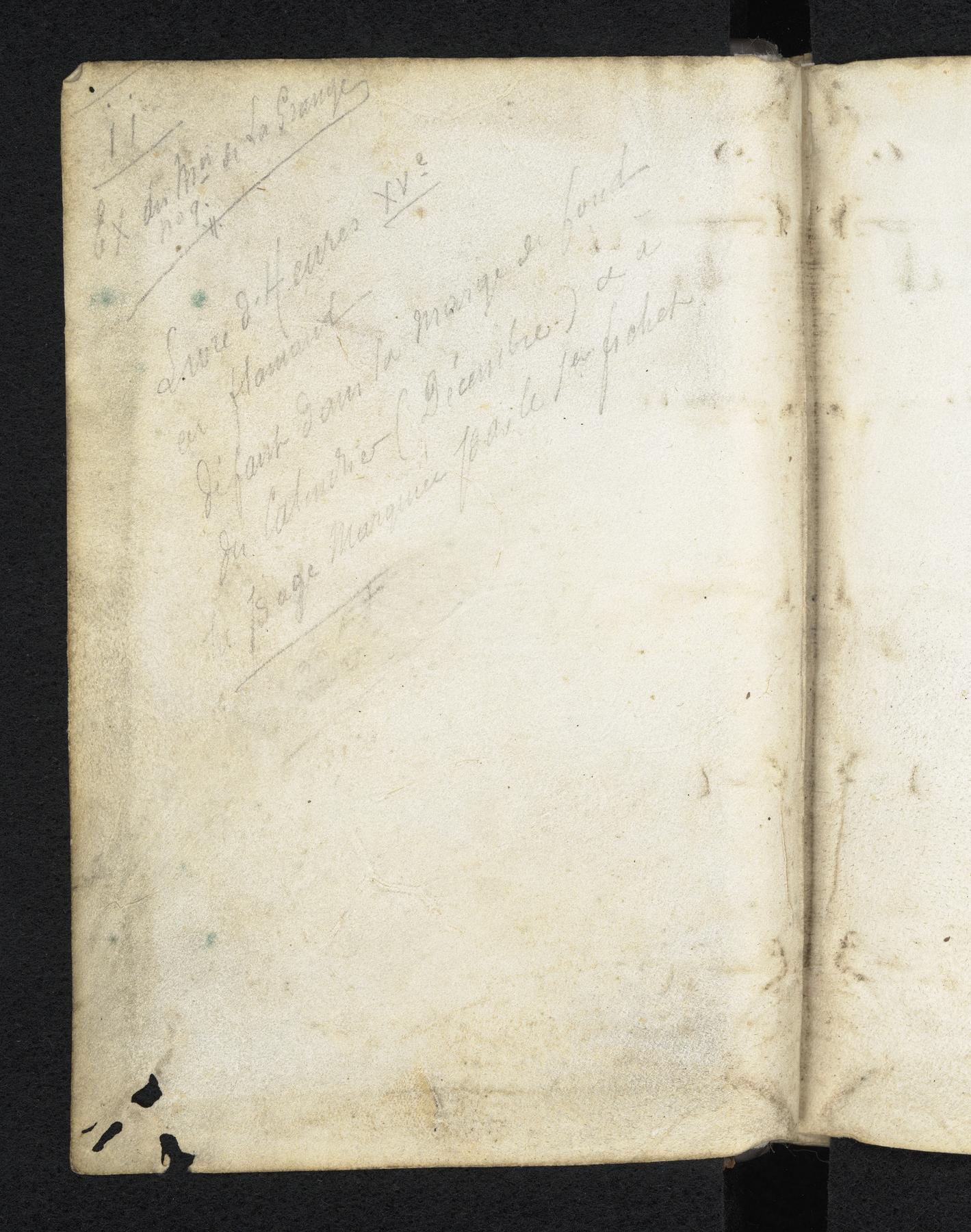