Fifty-two discoveries from the BiblioPhilly project, No. 49/52 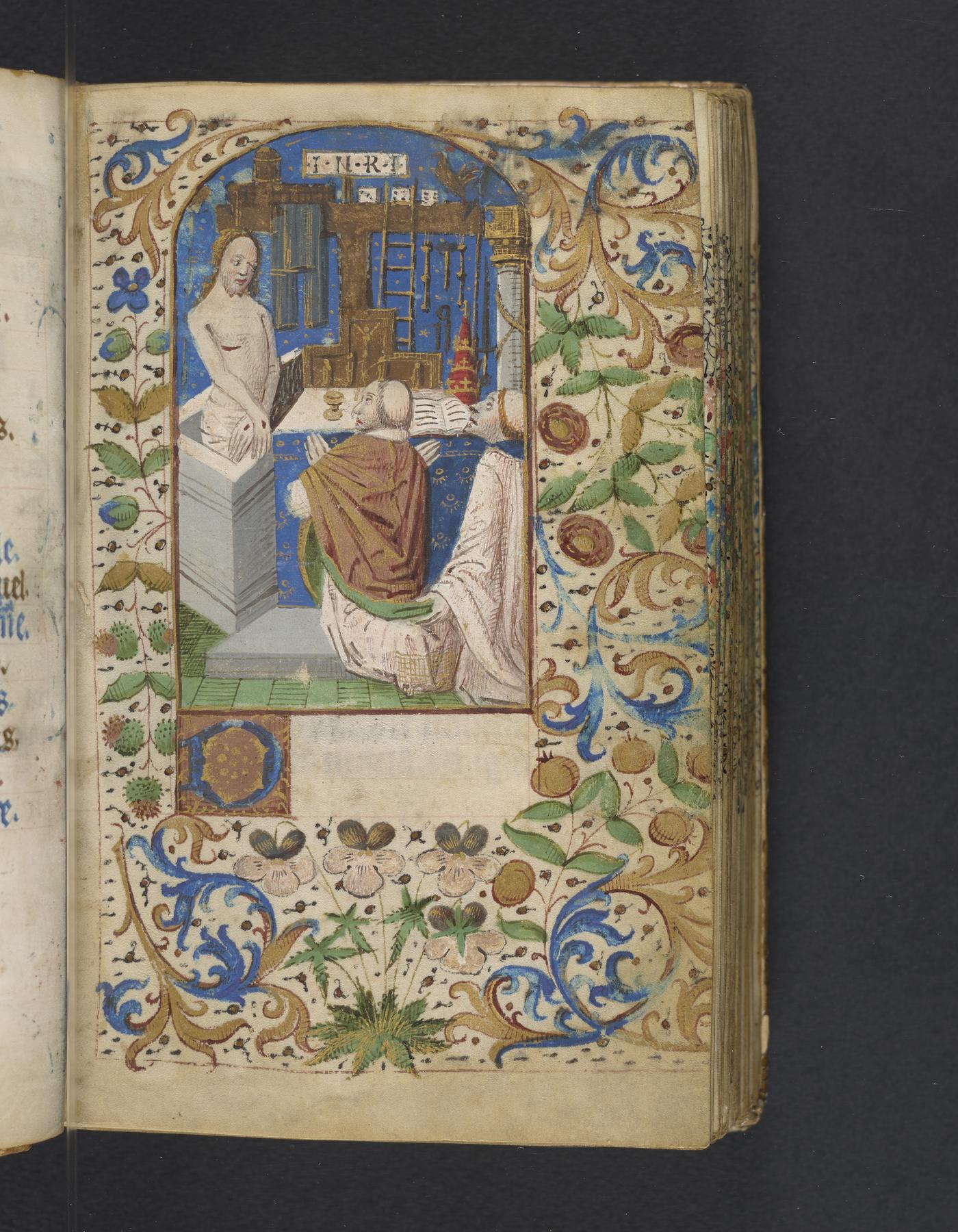 Book of Hours, Use of Rouen, Philadelphia, The Library Company of Philadelphia, MS 5, front cover and fol. 13r (miniature of the Mass of Saint Gregory)

It is well-known that Books of Hours could be used and treasured by multiple generations of readers. This is made clear by the frequent presence of ownership inscriptions from later centuries that are found on blank folios or flyleaves in many examples of the genre. Sometimes, these statements memorialize the names of later owners not merely as straightforward statements of fact, but instead in the form of  poetic, occasionally humorous verses. Such inscriptions are quite frequent in Books of Hours found in North American collections, as these volumes usually reached the book trade relatively late, after having been passed down through family ties again and again.

In this series, we have already encountered inscriptions that reveal the identities of later users in a variety of ways. Often, the words are addressed candidly to someone who might come across the book after the owner had misplaced it, recording the name of its rightful owner and explaining why it ought to be returned. In a case we discussed earlier at the University of Delaware’s Morris Library (MSS 95, item 31), for instance, an early female owner pleads from the pages of the book, enticing the hypothetical finder to return the volume with the promise of a reward: “I pray that you do not steal me; if you return me I shall pay the share, for without hours I cannot pray to God.” In a different example, found in a manuscript at the Philadelphia Museum of Art (inv. 1924‑19‑1), the means by which the manuscript was inherited are described in a note from 1577, which is accompanied by a sort of personal motto for husband and wife: “Love and Humility are the sweet bonds of our marriage.” Both of these notes are written in French (the translations are my own), and are contained within books otherwise written largely in Latin, though produced in French-speaking lands for a Francophone audience.

Such ownership inscriptions are interesting on a number of levels. They of course record provenance and give us a sense of the chain of possessors for the book, often providing evidence that predates the ownership histories that can be obtained from modern dealer and auction catalogues, which become truly systematic only in the early nineteenth century. In their poetic spirit, these inscriptions also provide a corpus of short, ditty-like sayings in the vernacular that might not otherwise be retrievable. Finally, the inscriptions confirm an important fact: even in later times, Books of Hours were portable objects, and were carried around (and used) extensively, so much so that they were at constant risk of being lost. Much academic research has been done on the earliest users of Books of Hours, their devotional habits, and their social milieus, but a full account of late-sixteenth-, seventeenth-, and eighteenth-century devotional use of late-medieval European books has yet to be written.[efn_note]For an exemplary study of the earlier “re-use” of Books of Hours in England, see Eamon Duffy, Marking the Hours: English People and Their Prayers 1240–1570 (New Haven: Yale University Press, 2006).[/efn_note]

All this brings us to our current manuscript, a Book of Hours for the Use of Rouen produced around 1470, which is now in the collections of the Library Company of Philadelphia (MS 5). Since the book contains a suite of miniatures by the workshop of the so-called Master of the Échevinage de Rouen (one of the leading illuminators in Normandy in the second half of the fifteenth century), it was deemed worthy of inclusion in the Leaves of Gold: Manuscript Illumination from Philadelphia Collections exhibition of 2001. As pointed out by James Tanis in the exhibition catalogue, the initial miniature of the Mass of Saint Gregory, shown at the top of this post, is painted in a different style, and was clearly added in at some point to replace a lost miniature of the four Evangelists.[efn_note]Entry by James Tanis in Leaves of Gold: Manuscript Illumination from Philadelphia Collections, ed. James Tanis (Philadelphia: Philadelphia Museum of Art, 2001), 76–77, cat. no. 18.[/efn_note] Tanis also noted that the fine gilt-tooled calf binding, which can be dated on the basis of style to about 1590, seems to have been retrofitted to the manuscript, at which point the book block was drastically trimmed along the outer edge to fit. This binding, interestingly, is stamped with the names “MARIE” and “LA BAILLETTE” on its upper and lower covers, respectively. The exact identity of this person, however, remains to be pinpointed. La Baillette was quite a common surname.

As is quite often the case, the ownership information is repeated again elsewhere within the manuscript. On a lower flyleaf we find this pair or rhyming verses, in what looks to be a different hand: “Ces heure apartienne à son maître qui n’et / ni Capucin ni prettre / mais en cas de perdision / Charles Thierri / c’et son nom.” (“These Hours belong to their master, who is neither a Capuchin nor a Priest, but in case of loss, Charles Thierri is his name”). The statement that the owner of this book is not a man of the cloth is surely intended to be amusing, as such a book must have seemed rather clerical and old fashioned by the eighteenth century. Directly below, we find the name of the secretary who seemingly wrote the inscription on Thierry’s behalf, a man rather generically named François Le Clerc: “vottre très humble / et très obeisans / serviteur François /Le Clerc / Le Clerc.” Superimposed on the whole inscription, upside down, is an unrelated long addition operation, jotted down here for convenience.

While the “very humble and very obediant” Le Clerc cannot be positively identified, I have found a trace of master Thierry. A certain Charles Thierry de Valdory is recorded as a member of the royal household during the early years of the eighteenth century, and an entry on geneanet.org relates that he was born in 1666 in Triel-sur-Seine and died in the same locale in 1737. Elsewhere, he is recorded as holding the title of Huissier de la salle du roi, a sort of honorific usher position (of which there were many) at the French court, from 1702 to 1730.[efn_note]William Ritchey Newton, Almanach de la Cour, second edition (Paris: 2020), 131, 5191.[/efn_note] This week’s discovery is thus fairly modest: virtually nothing else seems to be known about this figure, but it is always satisfying when the name of an obscure owner provided in a note can be matched up with the external historical record.